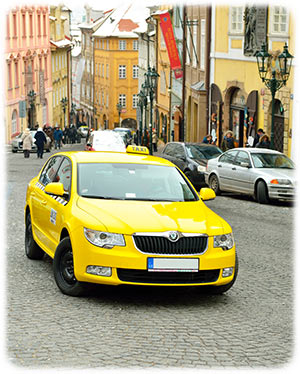 Prague’s Mayor has had the Chance to See for Himself whether the Many Accounts of City Taxi Drivers Ripping off Unsuspecting Tourists are True.

Posing as an Italian visitor, in a fake moustache and sunglasses, Pavel Bem hailed a taxi for a short ride – and was promptly overcharged by some 500%. Mr Bem said he was shocked by the extent of the problem and has vowed to step up controls on taxi drivers. The undercover operation in the Czech capital was thought up by a newspaper. The daily paper, Dnes – which has been campaigning against overcharging – persuaded Mr Bem to dye his hair black, slick it back and put on a moustache, goatee beard and pair of expensive shades for his disguise.

Once dressed as an « Italian », the mayor caught a cab for the 3km (1.8 mile) journey to Prague Castle. He found himself in a taxi with a rigged meter and was charged the equivalent of 26 euros (£18; $34) for a trip which should normally have cost 4.3 euros. « Disguised the way I was, I was certainly expecting to be charged a higher price, but not to such an outrageous extent, » Mr Bem said. Drivers caught overcharging face a fine or could lose their licence « The driver deserves to be severely punished – I am putting the matter into the hands of officials at city hall. » The cabbie could face a fine of up to 33,000 euros ($43,000), he added, and is in danger of losing his permit if caught re-offending. In another taxi, Mr Bem saw his fare shoot up by 200% when he asked if he could pay in euros, rather than koruna. He said more town hall staff would be tasked with going undercover to find cab drivers who were flouting the rules. Prague taxis have regulated meters but some drivers are said to have installed devices which speed the meters up to increase the fare. A German parliamentarian complained last year she had been overcharged during a visit, while most locals use only reputable minicab operators booked over the phone. Officials fear the city’s notorious cabbies could put off some of the millions of tourists who flock to Prague each year, bringing valuable income. In the meantime, Mr Bem’s advice for visitors is to agree a fare before getting in the taxi.

A BBC correspondent in Prague says stories about dishonest taxi drivers have become part of local folklore, with stories of drivers wiring up passenger seats to give customers an electric shock if they object to the price. (source BBC)

From mid-January 2010, Prague police have performed random checks and inspections of taxi drivers at the airport. In the period to 23rd February, police checked 355 cabs and issued fines totalling CZK 66,000. Also 50 drivers were reported to the municipal administrative department, and risk losing their licences because of breaches of the rules. Police focused on the airport cabbies because of frequent complaints from passengers regarding overcharging. According to the official price list, a taxi ride to Prague city centre should cost about CZK 600, but some corrupt drivers were not shy to ask as much as CZK 5000 (extract from the Czech press, Feb 2010).

Another example of a serious situation at Prague Ruzyně Airport is a case from November 2009, when an « illegal » cab driver swindled passengers who were undercover officers of the Prague City Hall. The cab driver charged them CZK 2,140 for a 10-kilometre trip from Prague Ruzyně Airport to the Hotel Diplomat (approximately five times the regular price of the fare). Another surprise surfaced when the police wanted to see his driver’s licence. The cab driver was driving without a licence because he had none, and he had already been arrested for the same offence once before.(source: Blesk newspaper, November 2009) Even though the problems connected to the taxicab services in Prague mostly concern foreigners, especially tourists, locals are also being frequently subjected to the « overcharging » practices. The editors of the Týden weekly magazine had decided to check the cab station marked a Taxi Fair Place, which, on behalf of the city hall, has been guaranteeing fair prices to the customers for the past two years. However, the actual situation is different and the « gold-diggers », being pursued by the city hall for many years to no avail, have been frequenting the cab stations marked as Taxi Fair Place anyway. The editors confirmed this when they hailed a cab at a Taxi Fair Place cab station. On its door, the car displayed the fare of 99 CZK per kilometre (an additional 99 CZK applies just for boarding the cab). Moreover, the taxicab driver had no problems with breaching the ordinance (which regulates a maximum fare to 28 CZK per kilometre). « I really don’t care, » answered the cab driver. (source: Týden Magazine weekly, October 2009)

No need to queue for taxis with high rates, or drag your bags around looking for public transport ... read more

Children are obliged to use car seats. Please inform us when making the reservation if children ... read more

We even offer free upgrade if you have a lot of luggage and there are 3 to 4 passengers in the car ... read more

Recently in the press (about dishonest Prague Cabbies, Taxi drivers). It is an official warning in any Prague guidebook: Watch out for the taxi drivers. Unscrupulous city cabbies are notorious for looking at wide-eyed foreigners .... read more